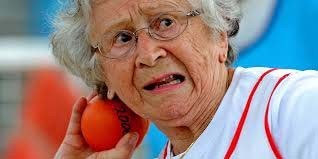 I recently read a story on BBC news about a 95 year-old Canadian lady, Olga Kotelko. She is the oldest female indoors sprinter, high jumper, long jumper, and triple jumper. She has over 30 world records and more than 750 gold medals.

What’s even more fascinating is that she began her athletics career at the age of 77 years!

Asked what her secret is, she says there’s none.

“I think your age is just a number. It’s not your birthday, it’s how you age which makes the difference,” she says.

“It’s your attitude to all the things that happen in your life that plays the biggest part,” she adds.

It took me a while to digest Olga’s personal philosophy: that it isn’t all the stuff that happens to us that play the biggest part in shaping our future… it is our attitude!

I am told that if you want to trap a monkey, it may not be that difficult. All you need to do is find a big glass jar that has a long mouth. This mouth should be big enough to allow the open palm of a monkey to go through, but too small for a clenched monkey fist to get out of. Fill the glass jar with multicolored candies and leave it where the monkey can see it.

A monkey cannot resist the bait. Once it gets its hand into the bottle and grabs a fistful of candies, it will not let go. And because it won’t let go, it gets caught.

Not too clever of the monkey, don’t you think so? But just as the monkey will not be free until it lets go of the fistful of goodies, we also cannot get ahead if we keep holding on to the unpleasant things that have happened to our lives:

Attitude, or self-talk, is the chatterbox in our heads. It is learned: we learn how to evaluate people, situations, events, or issues. Our attitude reinforces our opinion of ourselves, which controls performance.

You can learn to set your eyes, and heart, on a high peak of achievement, regardless of your circumstances. Only you can recalibrate your attitude.