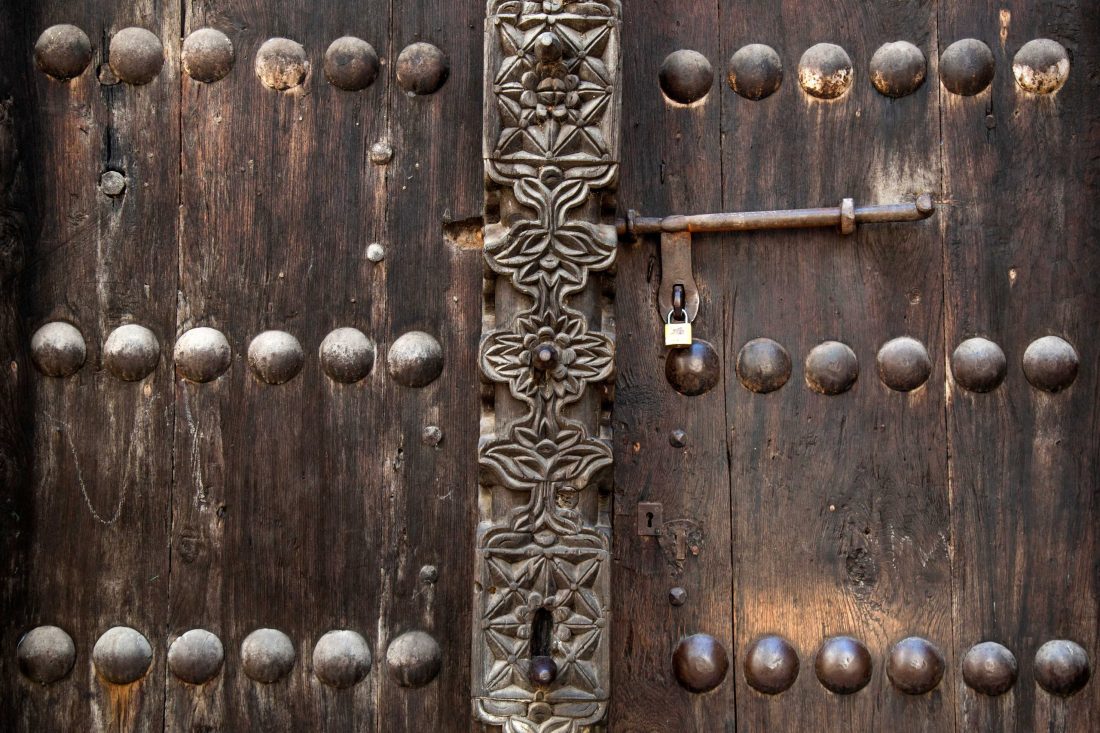 “When one door is closed, don’t you know, another is open.” —Bob Marley

Visit the East African coast. You’ll be awestruck by a remarkable feature—the Swahili door. Doors are a phenomenally important aspect of Swahili architecture.

Like me, you probably don’t think much about your house doors beyond checking that they’re securely locked at night. That is until you’ve misplaced your key and are locked out of the house. At this point, you may catch yourself staring at the door, hoping it would melt away or open miraculously. It’s hard to imagine that anything so small can impact your life so greatly.

It’s no wonder then that doors carry such deep symbolism. A lover scorned may decide to close the door of their heart to love. For him the door signifies intimacy.

A terminally ill person is said to be at death’s door and it’s comforting to picture departed loved ones at heaven’s door.

Indeed, in Islamic tradition, heaven is believed to have eight doors. And Christians are familiar with the imagery of Jesus as the narrow door through which we can enter God’s kingdom. In this context, the door signifies a life-changing transition.

The stunning and often massive Swahili doors in Lamu, Zanzibar, Mombasa’s Old Town, and other parts of the Swahili coast are an adventure in history. Looking at these doors you will get the sense that you could walk through them into a time long gone. And it’s no wonder since this style was first developed in the Middle Ages.

Swahili doors are by no means your average run-of-the-mill front door. They are not only veritable works of art but cultural icons as well. These are doors that speak. They tell something of the Swahili traditions of the region, and later of the Arab and Indian influences. The doorway consists of a wooden lintel, frame, and centre post decorated with ornate carvings. In the centre are two separate doors—the ‘male door’ on the right and the ‘female door’ on the left. Originally the doors were made of teak, which is naturally termite- and pest-resistant and requires no varnish. The teak doors tell the tale of trade with Burma. Later, mahogany and black wood were used as well.

Who lived behind these doors and what were their lives like? The doors have something to say about this. Larger and more ornate doors indicate greater wealth. The carvings also speak something of the house owner’s profession. Square shapes indicated an accountant. Waves and ropes told of a seafaring house owner; perhaps an owner of fishing vessels. Carvings of chains might indicate involvement in the dreaded slave trade. Inscriptions on some of the doors tell of the Arab influence. Decorative brass studs are a sign of Indian influence.

Who would have thought that something so seemingly unassuming as a door could mean so much? Could be such an icon of culture? Ask the Swahili. They may tell you that kila mlango na ufunguwo wake (every door has its key)—a great reminder of the diversity of the world’s cultures. And of the stories that doors can tell.

Cultural Expression is Never Out of Place

Cultural Expression is Never Out of Place