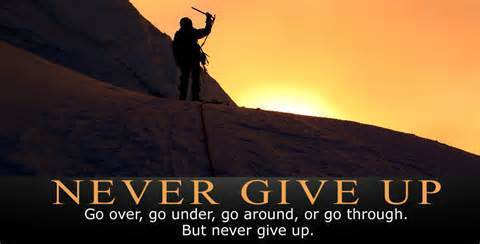 Never, Ever Give Up!

If there was ever a young man of exceptional talent, evidently destined for greatness, that young man was Isaac. At the age of 16, he was tall, athletic, and exceptionally quick in everything he did, and he had a mind and talent for inventions. He made his own record player, generated electricity for his parents’ homestead from the pit latrine, and assembled watches that pretty much kept time.

Isaac, however, struggled in school, no matter how hard his parents or teachers tried to push him. He soon became frustrated. Creating things was what he enjoyed doing, and he couldn’t see how cracking his brain with physics, math and history was a useful way to spend his days.

A few years later, I bumped into Isaac at Jevanjee Gardens, the familiar warm smile lighting up his face when he recognized me. He explained that the soda cart he was pushing was his current job after he failed his O-levels exams, and while he tried to figure out what next.

“You’re still going to be an inventor, right?” I asked hopefully.

“I failed flat in sciences,” he explained, his smile waning.

“No one seemed to think I’d go far with those things,” he added, now looking downcast.

That was over 20 years ago.

Three years ago, I got the sad news of Isaac’s death, and the even sadder news that his life had gone downhill – turning to heavy drinking, struggling with depression, and even attempting suicide a few times.

Could Isaac’s sad story have played out differently?

Thomas Edison’s teachers said that he was too stupid to learn anything. Ouch! He was fired from his first two jobs for being ‘non-productive.’ Then he tried inventing the light bulb, but ‘failed’ 1,000 times. Ouch! But he did not give up. When asked what it felt to ‘fail 1,000 times,’ he replied, “I did not fail 1,000 times. The light bulb was an invention with 1,000 steps.”

Retold from the book  Champion by David Waweru